The historic race for open-wheel midget cars has showcased some of the greatest open-wheel talents in history and is one of the largest pavement races of the year for the division. Love was second-fast in qualifying driving the Van Dyne No. 5 midget, missing fast time by a few hundredths of a second to the steady veteran, Mark Malliepard. Competing against drivers much older and more experienced, Love won his heat race, as did fellow competitor Chad Nichols.

The table was set for a great Main Event with Love going up against some of the most highly skilled veteran pavement open wheel drivers on the West Coast. Chad Nichols started on the pole and took an early lead as Love battled with fast time qualifier Malliepard to his outside.

After clearing Malliepard for third, Love and David Goodwill engaged in a multi-lap battle that resulted in Love moving into second place. Nichols had accumulated a full straightaway lead and Love went to work to shorten the gap. Love closed in on Nichols with about ten laps to go. The two of them worked their way through non-stop lap traffic while exchanging crossover moves, outside lane passes, and close quarter wheel-to-wheel racing.

Love took to the outside lane going into turn three coming to the white flag. Nichols went to cover the crossover as the drivers raced off turn four and Love carried the momentum up high to clear Nichols and take the white flag. The crowd was on their feet and the infield went wild as the two competitors sailed into turn one separated by three decades in age, just inches apart.

Love maintained the lead exiting turn two on the final lap and took to the bottom to defend against Nichols through turns three and four. Nichols never gave up, but as the cars crossed the stripe, it was Love in the lead – defeating the veteran Nichols and making history as the youngest ever full midget pavement feature winner.

The competitive young racer is no newcomer to breaking open wheel barriers and making history. Love was the youngest USAC Focus division racer ever at age ten. He went on to win six USAC Championships, including the USAC Western Focus “Triple Crown” by winning the Western Pavement, Dirt, and overall Championships in 2017 – the first driver to ever win all three Championships in a single year. His performance in USAC was instrumental to obtaining the waiver to run full midgets for BCRA and sprint cars for the Hunt Magneto Series at age 13.

The Bay Cities Racing Association (“BCRA”) was founded in 1939 and is the oldest running midget racing association on the West Coast. All the greats pass through BCRA on their way to the top. BCRA has hosted Jeff Gordon, Tony Stewart, Alex Bowman, Kyle Larson, Christopher Bell, and many others in its 79 years of racing history.

Although all the greats have won on their way through, Love is the youngest feature winner in BCRA history, taking the Harvest Classic at age 13.  Jesse had to apply for a waiver to run with the famed BCRA Midget Series since the organization’s age limit is 15.

Stepping up into a full-size stock car, Love made his debut in 2017 at Madera with the groundbreaking televised MavTV 51Fifty Junior Late Model series. The series is the brainchild of Madera’s promoter Kenny Shepard and was the first series in the nation to showcase the best 10- to 16-year-old drivers in the country in full-size limited late models.

Love won his first three appearances in the series. He went on to win five out of the eight televised races in 2017 and became the youngest stock car series Champion in the United States at age 12. He holds numerous records with the series including the most wins and most consecutive wins.

Showing skill and maturity beyond his years, Love also set the Track Record for Junior Late Models at both Madera Speedway and Nevada’s Las Vegas Motor Speedway. Based on performance and merit with the Madera Junior Late Models, Love was again granted a waiver to run the Madera RPM Pro Late Model series at age 13. Rewarding others’ faith in him to be capable of stepping up, Love took a podium third place finish in his initial televised pro late model debut in a stout field of 24 cars.

“I can’t believe that just happened,” the excited teenager exclaimed. “I just won the Fall Harvest Classic in a full-midget driving for Tres Van Dyke! How awesome is that? I cannot thank Tres and everyone who has helped me in any way to get to this point enough. I don’t even know what to say. Thank God for a safe race and for watching over all of us today. That was so much fun battling with Chad and throwing crossovers and just driving as hard as I could. Thank you to 51Fifty Energy Drink for their support and to all the people who encourage and push me to be my best. I had to get a waiver to race this car. I’m supposed to be 15 to race it. Now I’ve just won a huge race against some stout competition. I couldn’t have done this without my family and so many other people who give so much support to my dream.

ABOUT 51FIFTY ENERGY DRINK
51FIFTY Energy Drink, located in Livingston, California, was borne out of one man's desire to chase his dream. The entire team at 51FIFTY believe that everyone has the opportunity for greatness. The Energy Drink company is committed to giving back through its many racing programs, including Race for Autism. The Race for Autism is an autism awareness campaign where the company donates a percentage of every can of 51FIFTY Energy Drink sold toward the Carlos Vieira Foundation, a 501 (c)(3) nonprofit organization dedicated to helping families living with autism. To date, over $800,000 has been donated. 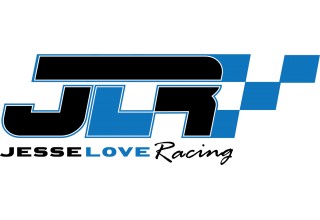 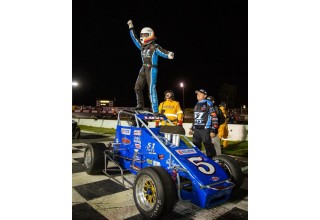 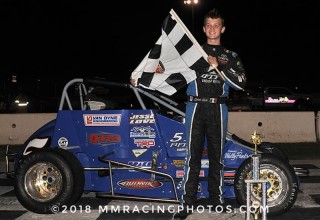 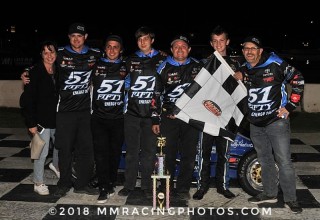