Tanner, one of the Northwest’s top dirt track racers, methodically charged from his 15th starting spot to the podium finish in his first ever series start. But the two-day event was not without its challenges.

“We were bottoming out the splitter really bad early in Wednesday’s practice,” the driver explained. “So, we spent more time initially getting things right than actually building speed. But by the end of the day, our team had us in the top five in single-lap speed and fastest on a five to ten lap run, so we were very confident going into race day on Thursday.”

The veteran dirt track racer noted that the track conditions on Thursday were slightly different than the previous day. “It had a bit more grip to it on Thursday, but we were still fast on average. We just couldn’t put down that one blistering lap we needed. We ended up seventh fastest in time trials, which put us starting outside of the second row in the first heat race. We made some adjustments to the car before the heat and I was confident in what we could do there. Then we got spun around on lap one and they never threw the caution, even though my car stalled, and I had to start it back up and keep going. I came from a half-lap back and ran faster laps than anyone in either heat race, but we ran out of time before we could pass many cars. That’s why we had to settle for a 15th starting spot in the feature. It was going to be a tough hill to climb.”

No stranger to passing cars, Tanner put on his best pair of hiking boots and started climbing that hill right away, passing his way to sixth place by the lap 50 break. With some key adjustments from the crew, the Eastside Paving, JPR Ford was dialed in for the second half and the driver charged to third place, but without the benefit of cautions to close the gap, Tanner was able to close on eventual winner Hailey Deegan and second-place Jagger Jones but couldn’t get by.

When the checkered flag waved, Tanner had driven from deep in the pack to finish a solid third, and Jefferson-Pitts Racing had a podium finish in what is becoming known as one of the highest-profile NASCAR K&N Pro Series West races of the season.

Overall, Tanner was very pleased with the performance and the result. “This was my first ever K&N start with very little seat time in a heavier stock car,” he said. “I was thrilled with our team’s perseverance and hard work to get us the finish we got, even if it wasn’t the result we were capable of. The communication between myself and the entire team the whole weekend was second to none. I can’t thank Jefferson Pitts Racing, Eastside Paving and Rick Sudan, and my family enough for this opportunity. I’m confident in saying we were the class of the field, and I hope I get another shot to prove to the world I can win a NASCAR K&N Pro Series race.”

Team Co-Owner Jerry Pitts was equally satisfied with the weekend. “Joey did a really nice job,” Pitts stated. “He got spun in the heat and that put us in a tough spot for the feature. He took his time coming through the field and drove a smart race. I believe if we’d had a caution once he got to third, we’d have made a race out of it because he was running comparable lap times to the leaders. Joey helped a lot with the setup and did a nice job of taking care of the car in the race. We really enjoyed working with him.”

Jefferson Pitts Racing (JPR) was formed in early 2015 after owners Jeff Jefferson and Jerry Pitts purchased assets from Gene Price Motorsports, where they combined for four series championships as crew chiefs. JPR has operated two full-time teams in the NASCAR K&N Pro Series West since their formation and has had tremendous success with drivers including Noah Gragson and Will Rodgers, who have built upon what they’ve learned in their climb up the motorsports ladder into national series competition.

Joey was born and raised in Portland, Oregon, where he grew up watching his father race around the pavement tracks in the Northwest. He started racing street stocks at age 12 and progressed to dirt late models at just 15 years old. He has traveled the country racing in events including The Lucas Oil East Bay Nationals and Dirt Car Winter Nationals at Volusia County Speedway in Florida, the Knoxville (IA) Dirt Late Model Nationals, and the Fastrack Crate Motor Nationals in at Friendship Speedway in Elkin, NC. Tanner moved to pavement racing in late 2008, competing in the Toyota All-Star Showdown in Irwindale, California, and ran the ASA Northwest Late Model tour in 2009, winning three races including the Yakima Speedway Fall Classic, and earning Rookie of The Year honors. He’s been back racing the family owned #111 Dirt Late Model around the west coast since 2010. Throughout his 16-year racing career, he’s gathered up over 91 Feature wins, three championships, and two rookie of the year titles. He won 13 of his 20 starts in the family late model on dirt in 2018. 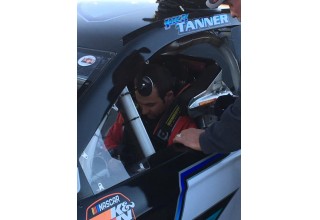