Tanner won 13 of the 20 races in which he competed with his family-owned dirt late model team last season and has over 91 feature wins, three championships and two ROY titles in a 16-year career, that started at age 12, and has included late model racing on both pavement and dirt at tracks across the nation. He brings with him a strong opportunity for JPR to reach victory lane in the only dirt-track race on the NASCAR K&N Pro Series schedule this season.

“We’re glad to have Joey racing for us at Las Vegas,” team co-owner Jeff Jefferson said. “Joey is a proven winner who has shown the ability to adapt to different tracks and different surfaces as well. He has tested for us in the past and we benefited greatly from his input. We feel Joey gives us a legitimate threat to win the race and we’re looking forward to working with him.”

Hearing Jefferson’s comments, Tanner smiled. “I feel very confident in our chances to win this race. It may be my first-ever K&N race, but I believe my experience on both dirt and pavement speaks for itself. I can't thank Jeff and Jerry of JPR enough for giving me this opportunity. It's been a lifelong dream of mine and their support and belief in me are unbelievable.”

Asked about how this opportunity came to be, Tanner said his relationship with the team began a year ago at a familiar track to him. “Last year, I went and helped JPR test at Willamette Speedway, a track I won the 2018 dirt late model track championship at, to help them prepare for the first dirt race in Vegas. I was very impressed with their equipment and was also intrigued by the fact that K&N cars would be racing on the dirt. I've known Jeff Jefferson and his brother for a long time, going back to the NASCAR Northwest Tour days and racing at Yakima Speedway, where the Jefferson name is very well known, so the history and friendship between his family and my own was already made. In December, I had a close family friend, Rick Suran, owner of Eastside Paving, approach me about sponsoring me to race the K&N race on the dirt in Las Vegas if it was to happen again this year. Rick and my family both thought that this particular race was the one that would benefit me the most for my racing career and that it was finally time to make my jump into the NASCAR ranks. Once the race date was announced, we were able to put the deal in place for me to compete. I chose JPR because I believe in their program, their equipment and team owners Jeff Jefferson and Jerry Pitts. I thought my best chance to win was with them, based on history and our relationship.”

The Star Nursery 100 for the NASCAR K&N Pro Series West takes place on Thursday, Feb. 28, 2019, on The Dirt Track at Las Vegas Motor Speedway. This will be the second time the series has run this event. The event will be taped for television by NBC Sports Network, airing on Tuesday, March 5, at 6 p.m. Eastern.

Jefferson Pitts Racing (JPR) was formed in early 2015 after owners Jeff Jefferson and Jerry Pitts purchased assets from Gene Price Motorsports, where they combined for four series championships as crew chiefs. JPR has operated two full-time teams in the NASCAR K&N Pro Series West since their formation and has had tremendous success with drivers including Noah Gragson and Will Rodgers, who have built upon what they’ve learned in their climb up the motorsports ladder into a national series competition.

Joey was born and raised in Portland, Oregon, where he grew up watching his father race around the pavement tracks in the Northwest. He started racing street stocks at age 12 and progressed to dirt late models at just 15 years old. He has traveled the country racing in events including The Lucas Oil East Bay Nationals and Dirt Car Winter Nationals at Volusia County Speedway in Florida, the Knoxville (IA) Dirt Late Model Nationals and the Fastrack Crate Motor Nationals at Friendship Speedway in Elkin, North Carolina. Tanner moved to pavement racing in late 2008, competing in the Toyota All-Star Showdown in Irwindale, California, and ran the ASA Northwest Late Model tour in 2009, winning three races including the Yakima Speedway Fall Classic and earning Rookie of The Year honors. He’s been back racing the family-owned #111 Dirt Late Model around the West Coast since 2010. In his 16-year racing career, he’s gathered up over 91 feature wins, three championships and two ROY titles. 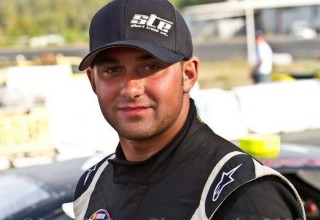