MADERA, Calif., October 11, 2019 (Newswire.com) - ​​​​​​​​Mobile, Alabama racer Grant Thompson, 13, made good on the opportunity he received at the 1st Annual Jr. Late Model Challenge Camp for aspiring young racers aged 11 through 15, held recently at Madera Speedway in Madera, California, where he was selected by a panel of motorsports industry experts to compete in the 51FIFTY Jr. Late Model race at Madera Speedway in California on the track’s championship night last Saturday.

The youngster ran as high as fourth before finishing sixth against some of the best Jr. Late Model racers in the nation in an event that is scheduled for broadcast on MAV-TV later this fall.

The camp was the result of the combined efforts of the Madera Speedway, Race Face Brand Development and Naake-Klauer Motorsports as well as main sponsors I Pull-You Pull, JM Environmental and the West Coast Stock Car Hall of Fame. A panel of industry expert judges awarded the opportunity to Thompson, who competes throughout the Southeast in the Southern Pro-Am Truck Series, accumulating several wins and podium finishes in his young career. He won the 2019 Mobile International Speedway track championship in this division this year.

Well-spoken and very humble, Thompson says he still cannot believe what has happened in his life and his promising racing career over the last couple of months. “I am just so thankful to everyone who put on the camp, chose all of us young racers to participate for free and chose me to represent the camp at last weekend’s race. This whole experience has been amazing, and it has taught me so much about racing and given me new friends from all over the country.”

Of last weekend’s race, he said, “Driving for Mike Naake and Naake-Klauer Motorsports was just incredible. I was excited and nervous to start the race, but then I relaxed and just drove the best I could. My teammate, Joey Iest, wrapped up the championship that night, and there were a lot of cameras and media there. I realized when I was selected to run this race that it meant a lot of exposure for me and that maybe from that I would have a better chance at getting a sponsor. I still don’t really know how to explain how grateful I am to have experienced racing out there in California with Naake-Klauer, but I hope that I will be able to do it again sometime because they taught me a lot and it was fun.”

John Thompson, Grant’s father, is still trying to process all that this opportunity has meant to his son. “The magnitude of being chosen for the camp, then being able to watch Grant experience that and experience it with him, let alone the part about being able to run an actual race for Naake-Klauer Motorsports, is almost indescribable. Grant’s dream is to race in NASCAR, and opportunities like this to meet the type of people that are involved and to show that he can get into a late model at 13 and race with respect and finish sixth out of over 20 drivers in his first attempt, as a parent it’s almost overwhelming to see the joy and the confidence that he’s gained from this whole experience. We just cannot thank Race Face Brand Development, Madera Speedway and Naake-Klauer Motorsports enough for everything they’ve done. We’ve met so many nice people and Grant now has friends he never would have known if not for this opportunity.”

Naake-Klauer Motorsports co-owner Mike Naake said he was highly impressed by Grant’s performance through the weekend. “He went right to the top of the speed charts in his first practice on Friday and ended up second quick to his teammate Joey (Iest) on Saturday. He ran in the top six all weekend. We were very impressed with his ability to adapt to a new car on a new track so quickly, and he worked really well with us and with his teammates.”

The Jr Late Model Challenge Camp and a one-hour “In The Life of Grant Thompson” were filmed for broadcast on MAV-TV in the fall. 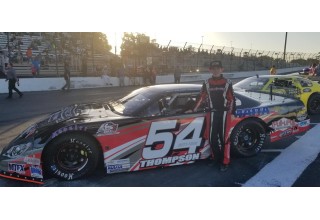 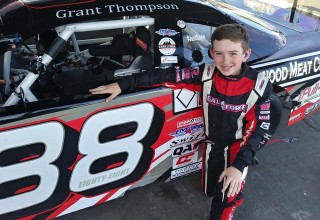